Since our ordeal with the builders plastic and the sail drive, we have been parked up in a cute little town on Cephalonia called Sami. I mentioned in my previous post that this is where they filmed Captain Corelli’s Mandolin. What I didnt know until last night (because I havn’t seen the movie or read the book) that there is truth in the story. From talking to the loverly old Dutch couple a few boats up, during the war there were 1000 Italian soldiers based in Cephalonia during the War. The Italians, developed a good relationship with the locals and co-existed. The Germans however were not to happy with how close everyone was getting so, even though Italy was and Ally, they killed all the Italian soldiers on the Island. All for what I would think a not so strategic site in this day and age.

Sami and Cephalonia has a rich history as being a strategic port for trading acting as a gateway between the east and western Mediterranean 1000s of years ago. During the Roman Occupation Sami was the Last town to surrender after being under siege for years.

One of the main attractions here is the Melissani cave, also known as the cave of the Nymphs is situated about 2kms from Sami. The Melissani cave is the largest of a network of underwater caves across Cephalonia that are all interconnected. Legend has it that it is named after a young shepherd girl call Melissanthi who found that lake while looking for one of her sheep that had wandered off. When she came upon the banks of the lake, she was so frightened that she would fall in, she left in a hurry, since that day the lake has been know as the lake of Melissani. The more romantic version is that the nymph Melissanthi killed herself in this very same lake because the God Pan would not return here love. This has some credence as archaeologists have unearthed a clay idol of the god Pan as well as a clay disk with at representation of Nymphs dancing in a circle and a clay tile with the procession of Nymphs walking towards the left. Archaeologists have dated these finds to the late 4th to early 3rd century BC and believe it was an important place of worship for the locals of that time.

As we prepared for this trip by learning to sail, saving up, researching boats etc, there was one thing that i wanted to do but never quite got there. I wanted to complete a diesel engine course so I would be able to maintain the engines for basic issues. Unfortunately time ran out and did not coincide with course dates so one of my issues has been “what if the engines die and we don’t have any wind”.

Well my friends, yesterday it happened. While motoring from Vathi in Ithaca to Sami on Cephalonia (where they filmed Captain Corelli’s Mandolin). The wind was on about a knot and a half, Engines firing well then all of a sudden their was a change in the noise from the port engine and some rather large vibrations.

Well what followed what just a little stressful. I put the engines in neutral, opened that hatches and looked at the engine. Yep, just as I suspected, the engine was there where it was supposed to be. After a few tests, I was able to work out the vibration only started when we had high revs on the engine so the quick solution was to leave it in Neutral.

One of the beauties of buying a Cat is that there is redundancy in many areas. We still had our starboard engine to drive us forward albeit at a slower pace. Now however we had time to work out what we should do. Do we 1) keep going to Sami and try to Med Moor and seek a Diesel mechanic. (med mooring a cat with one engine is not so fun) or 2) do we go back to Lefkada where we know and know there is a mechanic. (but will still have the mooring problem.)

So after a quick phone a friend to fellow Australian Toby from S/V Alltogether to discuss prospects of finding mechanics on greek islands, a quick looks at the Navionics app on the Ipad to work out how long it would take to get back to Lefkada on one engine, the decision was made to keep going to Sami and hope for the best.

After a slow passage we made it to the port in Sami, Cam and Max preparing a pile of belongings to take in the life raft just in case the boat started to sink. Two attempts at Med mooring. 1 upset owner of a Moody 376 that we rested against during the first aborted med mooring attempt we were now tied up on the pier.

Time for a short solo walk to town and back to calm the nerves. Did you know that one of the favourite past time of yachties in port is to watch other yachties come in to port. When things go wrong the audience gets larger, we were now part of the show.

Anyhow, time for a happy ending. The boat that came in straight after us was another Australian boat. As you do, we ended up striking a conversation with David and Ann from S/V Austral after a quick discussion with David on the symptoms of the problem he mentioned the possibility of a plastic bag being wrapped around the propeller. Well looking down at the water their is an image under the end of the boat that doesn’t look like a reflection from the boat.

A quick strip down to my shorts, grab the snorkel and mask, into the water and low and behold, its not a plastic back but a very large sheet of black builders plastic wrapped around the propeller and sail drive. Now it has been removed i am sure that the engine will be fine but I will need to double check that when we leave. Just quietly, I am stoked not to have a big repair bill for the engine. (touch wood) 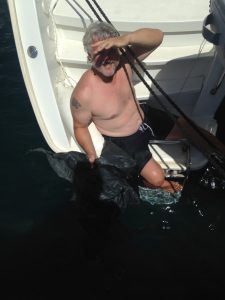 The Offending Black plastic after being removed

So before we left Australia, I adamantly said that I would have a blog up and going and will send everyone the link. As I sit here in a cafe/bar in Vathi on the Island of Ithaca in Greece, I am only now really having time to reflect on what has been happening over the past 4 months. The question now is how the hell do I get this web/blog site live and up on the net  and add 4 months of content to explain what has been happening in the life of the Eilbeck 4 and No Plans Just Options.

After I finish this current blog post, I will endeavour to find somewhere with enough internet connection for me to upload the website details and make it live.

So as a start and a finish, we now have a boat and are living on it. Most of you probably already know that from other forms of social media and communication but hey, thats the competition between Zoe and I at the moment. Who can get the update/post out there first.

So stay tuned and I will try to back date as quickly as I can.

So we have a dream, nothing too big. Just something we thought we would like to do. We want to take time out, take our family away for a year and sail the Mediterranean. We want to show the boys other cultures, ways of life and build memory’s and bonds that will last.

When we told people that we were going to take a year off life, buy a catamaran and sail around the Mediterranean, One of their first comments/questions is normally “You must have been planning that for a while.” The fact of the matter is Yes and No.

Why Yes and No? I hear you ask. Well, we first had the dream about 6 years ago however we had no set date or time. Don’t ask me where it came from or who’s idea it was because neither Zoe or I know. All we knew is that we wanted to do it at some stage in our life and it gave us a goal to think about while navigating the day to day of normal life.

I have to say, I am pretty sure that anyone that we mentioned our dream to, in those first four years thought “Good on Ya, you don’t even know how to Sail”. Even when they were saying encouraging things.

Fair enough! Up until 20 months ago, my sailing experience totalled a few terms of sailing dinghies and Lasers on the river and farm dams near Richmond for school sport, and the catamarans on the annual St David’s church camp on Port Hacking River about 25 years ago.

So, after 4 years of dreaming we thought it would probably be a good idea to find out if we actually liked sailing. Let’s face it, If one of us didn’t actually like sailing, it would be a big setback and a lot of wasted dreaming. What’s worse is that we would have to agree on another dream and most people that know Us, know that it’s not that easy finding something that we both agree on. So to make a long story short, 20 months ago we started down the path of learning to sail.

Now in the last few weeks we arrived at a cross roads of choice. Next year Cam starts year 4 and it is the last year before Max starts school. After 11 years of building up her business, Zoe has decided to step back and make time for herself.

It is the last window of opportunity to put the dream into action or wait another 12 years or so for the boys to finish school.

In late January we started the first leg of our dream and flew to Greece to buy ourselves a 40 foot catamaran.